Yesterday we celebrated the 60th anniversary of Hungary’s revolution against the Communist dictartorship, the presence of the Soviet troops and the Stalinist totalitarianism.

My father was 5 years old in 1956. This is his story. He was abbout to accompany his uncle to bring a radio to some friends. There were fights all over the streets, all around the city. My father and his uncle tried to get from the city center to another district of Pest. When they reached the Liberty bridge my father spotted a huge tank at the Pest side of the bridge. He was frightened. But then, he saw that there was a piece of cloth stuffed in the muzzle of the tank. He was relieved. He said to himself that he wasn’t going to die that day.

Let me tell you more, book the Communist Budapest Walk! 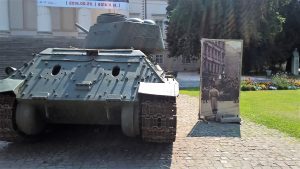 Julia
I'm a passionate and enthusiastic tour guide with fluent English and French and I would like to show you around my beautiful country that I hope you'll never forget.
Previous postAbout private tours
Next postHalloween vs All Saints’ Day and All Souls’ Day